Today (15 Oct 2011, Sat), or rather tonight, marks the 160th anniversary of the start of regular operations of the Horsburgh Lighthouse. The lighthouse, which is located on Pedra Branca, started daily operations on 15 October 1851 (Wed).

Horsburgh Lighthouse was named after James Horsburgh, the Hydrographer of the East India Company from 1810 to 1836.  John Turnbull Thomson was the architect, engineer and surveyor of the entire project.

The International Court of Justice (ICJ) ruled that Pedra Branca is Singapore’s territory on 23 May 2008.  As we are using the decimal number system, it is quite common to mark significant ‘multiples of 5’ (or 10) anniversaries.  This year (2011) is therefore significant as it is the first ‘multiple of 10’ anniversary (decennial) since the ICJ decision of 2008.

I’ve mentioned in earlier emails that the year 2011 is filled with events and anniversaries.  Singapore spent quite a bit of effort and resources on the ICJ Pedra Branca case but when this significant anniversary (at least to me) comes along, nothing, silence.  So, I thought another short email story is in order.  At the very least, it can raise some awareness about the anniversary.

A ‘Notice of Mariners’ was issued prior to the commencement of regular operations of the Horsburgh Lighthouse.  It was published in the local newspaper on 6 October 1851.

This notice took about two months to arrive in London.  The London Gazette published the same Notice to Mariners on 19 Dec 185:

As I read more about the personalities involved in the Horsburgh Lighthouse, I found that there are a few more significant ‘multiples of 5 or 10’ anniversaries in 2011 :

Full extent of the ‘Survey of the Straits of Singapore’ by Samuel Congalton and John Turnbull Thomson. First published in 1846 and updated in 1855 to include the Horsburgh and Raffles Lighthouses. 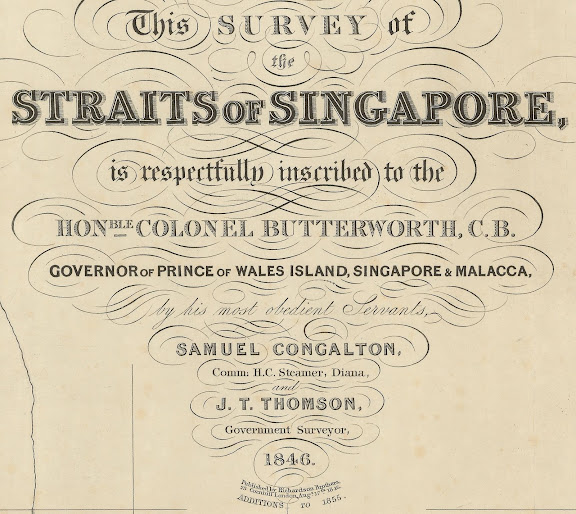 Title block from Thomson’s ‘Straits of Singapore’ map. Originally published on 17th August 1846, it was updated in 1855 to include the Horsburgh and Raffles Lighthouses. By 1855, Thomson had left Singapore for good, never to return. The original publication date would become Indonesia’s Independence Day 99 years later. 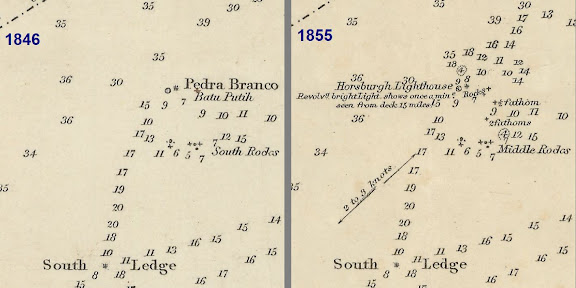 The ‘Survey of the Straits of Singapore’ map was printed on two halves. No copies of the original 1846 edition of the western half are known to exist today. Both the 1846 and 1855 editions exist for the eastern half. What we call ‘Middle Rocks’ today (see 1855) was known as the ‘South Rocks’ in the 1846 edition.

Some more details about Thomson after the Horsburgh Lighthouse was completed.  By 1853, Thomson was feeling very unwell and he was granted medical leave in England.  Half-pay was granted provided his leave of absence did not exceed 15 months.

Thomson left Singapore on 1 Sep 1853 (Thu) on the Ganges bound for Galle in Ceylon.  He returned to Singapore on 3 Nov 1854 (Fri) on the Singapore from Galle.  He was away for 1 year, 2 months and 2 days, just a few weeks short of 15 months.  He claimed for and presumably received his half-pay upon his return to Singapore.  He visited his hometown during his leave in 1854.  He also had a town map of Singapore published in London in 1854.  This is a rarely known map today as the reprinted copy in existence in the Singapore museum and library does not have the place of publication nor Thomson’s name printed on it.

After Thomson’s return to Singapore, he tried to seek and apply for another government post.  But nothing was available and Thomson was rather disappointed.  He was not well yet and he decided to leave Singapore for good this time.  He resigned from his government surveyor post and left Singapore on 23 Feb 1855 (Fri) on the Singapore bound for Malta.  Back in Britain, he again visited Northumerland and the Scottish borders.  Sometime in 1855 when he was back in the UK, he updated the 1846 chart of Singapore Straits which he had published with Samuel Congalton.  But by 1855, Congalton had passed away (in April 1850).

On 26 Oct 1855, he departed England from Gravesend on board the barque Ashmore.  On 6 Feb 1856, the unaccompanied Thomson arrived in Auckland, New Zealand after a journey of 105 days. 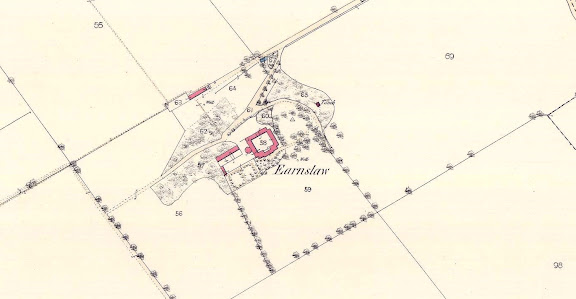 ‘Earnslaw’ farm, north of Coldstream in Berwickshire, Scotland. Thomson’s grandfather’s farm. His grandfather was James Thomson, the laird of Earnslaw. JTT would name a mountain in NZ Mount Earnslaw. But before he went to NZ, there was an ‘Earnslaw’ on Singapore maps during JTT’s time in Singapore, from about the late 1840s to the early 1850s. It was located near or at Caldecott Hill, somewhere near the present site of MacRitchie Reservoir along Thomson Road. [Map: 1:2500 Sheet XXII.12 (Swinton). OS Map of Scotland. Surveyed 1858, published 1862. NLS.]

Thomson’s grandfather had a farm named ‘Earnslaw’ in Berwickshire, Scotland.  In the late 1840s and early 1850s, the name ‘Earnlaw’ appeared on Singapore maps, presumably named by Thomson himself.  The ‘Earnslaw’ was located at the hilly area close to or at Caldecott Hill.  It was located quite close to Logan and Brown’s hills and estates in the area.

The University of Otago (in New Zealand) holds the paintings of Thomson.  If you go to this website [http://digital.otago.ac.nz] and search for ‘John Turnbull Thomson’, you’ll find the 203 paintings by Thomson in the collection.  As I went through the paintings, I found one entitled ‘Bass Rock’.

Title: Bass Rock (near North Berwick, Scotland). Watercolour on paper by John Turnbull Thomson. Undated, but most probably 1878 when he visited England and Scotland for the last time. 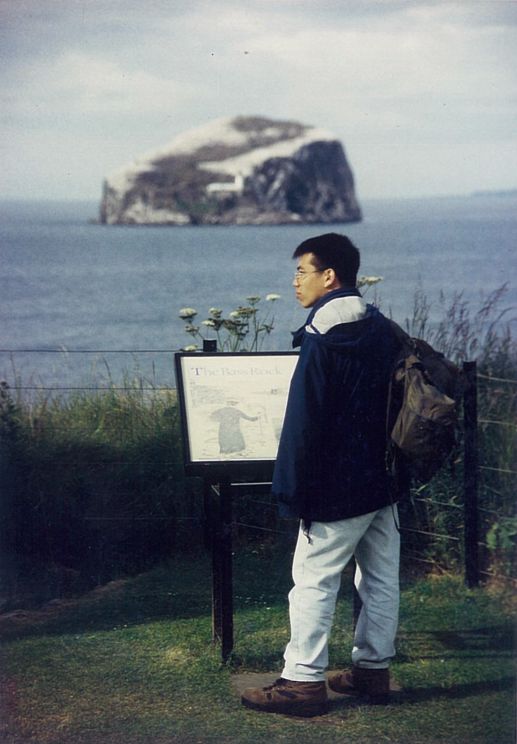 The Bass Rock in the background with myself in the foreground. Candid photo taken from Tantallon Castle lookout point sometime in 1995, by a German friend. The signboard reads ‘The Bass Rock’.

It brings back many pleasant memories.  I was not able to find the photos which I took of my visit there but I did find one which was taken by a friend.  At that time, I had no idea that the area was Thomson’s homeground.

Here are some web sites with more details on the Horsburgh Lighthouse, and the people and places mentioned above:

I hope you find this email of some interest.  It has again been written in much haste to meet the 160th anniversary deadline of 15th October 2011.