Two weeks ago, we discovered a shop run by a friend of a friend, called Hornet’s Nest, at Big Splash. This shop is like an upscale Beach Road military supplies shop (look them up on Facebook), so how not to loiter? Well the ESS sunglasses on display caught my eye because it has changeable lenses, mongst other things – black for the sun, clear for nights and yellow for low-lit dusk and dawn.

I’ve been using King’s safety googles, usually carrying two per ride. They have gradually been scratched, although tolerably so, but would have to be replaced  eventually – which is easily done at Changi Vilage for between $12-$15 per pair. So not too much heart pain if I sit on these!

But that Sunday, it was BLAZING hot and Kevin didn’t have shades so I passed him mine for the ride back and forked out $77 for an anti-scratch ESS Ice Eyeshields. It came with a black, a Hi-Def Yellow and a Clear Lens. The lenses cover a wider field of vision than my old pairs, which I am happy about, comes with an anti-fog cloth, won’t shatter on impact and is relatively frameless and extremely light (see specs here and this poster).

Eventually I learnt NOT to throw my shoulder out whilst removing and adding lenses, once I realised I would not break these hard lenses and then its utility asserted itself.

I use glasses, or more accurately “eyeshields,” during a ride to keep particles out of my eyes and to screen the sun. Both are helpful during any type of ride, so even if it’s an amble, I have shades on! 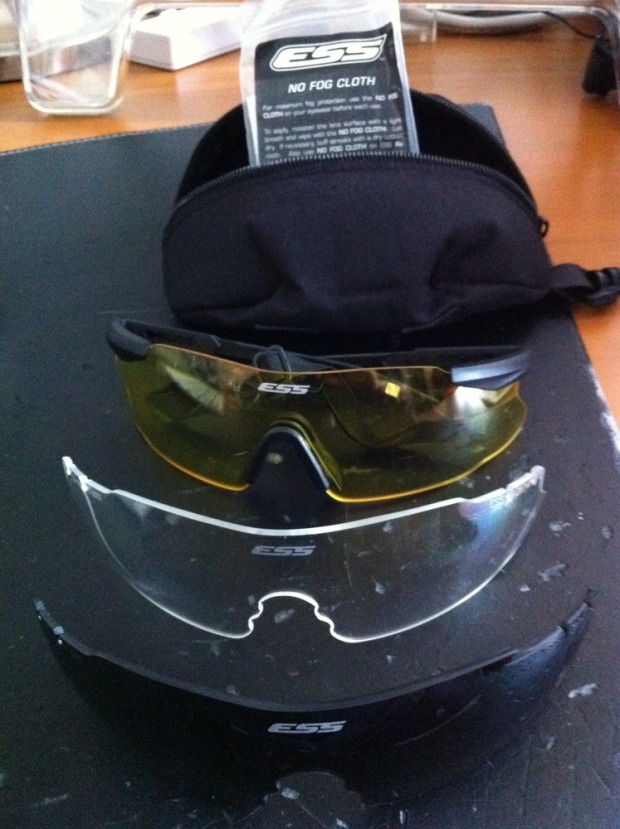 About four years ago, all Singapore government webpages were revamped to bear a standard search tool on the top right hand corner of each site. This standardisation must have seemed like a really good idea to unleash on halpless users. What they forgot to add was the warning about the true state of affairs, namely “This search engine sucks!”

What am I talking about?

Well, this evening, I rode the Ulu Pandan Park Connector and discovered it had been reconnected with the opposite bank of the Sungei Ulu Pandan once more; very nice! In looking for the relevant NParks webpage for the park connector, I gave the site search engine a try. To my disgust the “Enhanced Singapore Government Online Search” declared that my search phrase “did not match any documents”.

Thankfully, there is Google, so you can circumvent this idiocy by making a domain-specific search like so: ulu pandan pcn site:nparks.gov.sg – this returns hits from within NParks webpages only (note that searches with “www” return a different, less useful result in this case).

Why can’t the government’s search engine do this?

In reality, the NParks webpage for Ulu Pandan Park Connector has been sufficiently well-referenced by bloggers, twitterers and users on flickr and youtube, that it will appear right at the top of a basic google search for “ulu pandan pcn” and even with a simple “ulu pandan”, the park connector page was ranked fourth.

In order to get a feel of what some people think, or to view recent photos of the park connector, and for other miscellaneous information from the “crowd”, a blogsearch is always critical. Thankfully there are still some bloggers writing about their positive experiences! Such a search should be widened with the addition of the words “park connector” and canal – reading beyond the first page of results allows you some appreciation of the extent of the Ulu Pandan PCN and its users.

Blogsearch with additional keywords reveals experiences of the crowd quickly

Well, there is a lot more to search and we’ll leave that alone for now. Back to the original issue of sucky search engines on Singapore government webpages – on 16 March 2009, I went down to brief NParks about my perceived inadequacies of their post-revamp webpage as part of feedback for the National Biodiversity Strategy and Action Plan; my points did include the problem with the search engine. I even brought along two relevant individuals for additional comments – the prolific blogger and Singapore’s natural history online resource provider Ria Tan of WildSingapore and Lucian Teo who designed the fast loading and intuitive MOE webpage, an example of clarity for all other government sites. NParks was certainly open to the suggestions but the only real positive outcome we heard about from the webmaster later was that the search engine’s default setting had been changed. It would now search the NParks site by default instead of the entire Singapore government portal! Well, that certainly made search results less bewildering for a user, but would the results be enlightening?

There appeared to be some helplessness about this problem since every agency and ministry around 2008 and 2009 appeared to have been be reeled in, one by one, to adopt this plague of an engine, some earlier than others.

I first noticed when I lost the ability to make effective searches on NHB and NParks webpages, but more so when members of the pubic sought help to find the Chek Jawa page to book a visit – and this went on for a few years and still does, as Ria Tan from WildSingapore too can attest. So I helped, like she did, by putting in a direct link to the relevant popup window from the NParks site on the old Chek Jawa webpage.

So who is responsible for this ineffective search tool on our government webpages?

It seems it is none other than the Infocomm Development Authority of Singapore (IDA) who describe the “Singapore Government Metadata Standard (SGMS)” on their webpage:

“The SGMS serves to enhance the accuracy of search results obtained for searches on government-wide information and services on the Internet. Searches done through an SGMS-based search engine and user interface will provide for an integrated approach for the public to reach government e-services conveniently and effectively. The search engine known as the “Singapore Government Online Search” is available on http://www.gov.sg.”

Many moons ago (possibly a decade) NUS too had a unique search engine. However, it had become inferior to google, and I pointed this out to the web team then, as I am sure many others did. Today, if you use the search box on the NUS webpage, guess what is does? Why, it takes you to google and conducts a domain-specific search; how smart of them!

I’ll email IDA to ask about this – as a user, this aberration on Singapore government webpages doesn’t make sense. Especially since the button to initiate a sucky search is near the word “Excellence”.