On 20 April 2004, a temporary retaining wall of the tunnel at the MRT Circle Line near Nicoll Highway collapsed. The subsequent cave-in left a 30m deep ravine (the depth of the excavation) which the surrounding area and highway sank into. Thankfully most of the construction workers were having their tea break and a greater tragedy was averted.

The Singapore Civil Defence Force Disaster and Rescue Team (SCDF DART) searched for four days, persevering to recover bodies for return to their families. Indeed they would return three of the four missing workers to the surface.

The fourth was that of 40-year old Heng Yeow Peow, the Site Foreman at the Nicoll Highway tunnel. Eyewitness accounts report that he returned to the collapsing tunnel to rush his team of workers out to safety. He saved their lives and lost his. We remember him for his courage and love for his fellow man.

“To a stranger, to a friend, To give in such a way that has no end”
“We are how we treat each other and nothing more”

The Alternate Routes wrote and produced “Nothing More” for Newtown Kindness a kindness movement in memory of Charlotte Bacon, from Sandy Hook Elementary School.

2004 reports of the incident in newspaper articles are mostly offline and only available onsite at NewspaperSG through the multimedia stations at NLB. Technical analysis about the braced excavation collapse and the Committee of Inquiry interim and final reports are available online.

Having blogged about Ship Finder, I must mention FlightRadar24, which I first learnt about. It locates and tracks planes the way Ship Finder does for ships.

Here I was observing a flight from Beijing make landfall after crossing the South China Sea a couple of days ago. 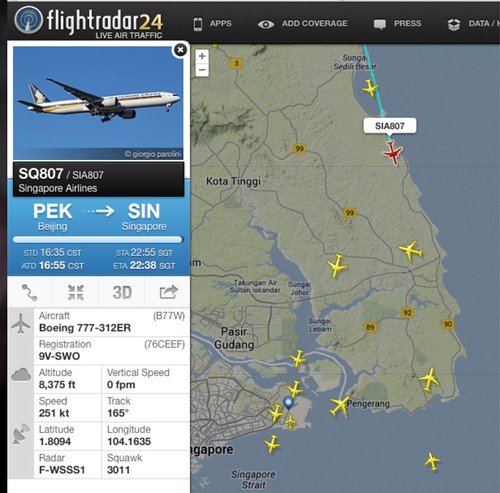 On this midday screen grab from today, notice the wide arc taken by the Tiger Airways flight TGW2104 to Bangkok. Helpful when you plan to take air photo of our coastline and islands and are wondering about the typical trajectory of a particular flight. 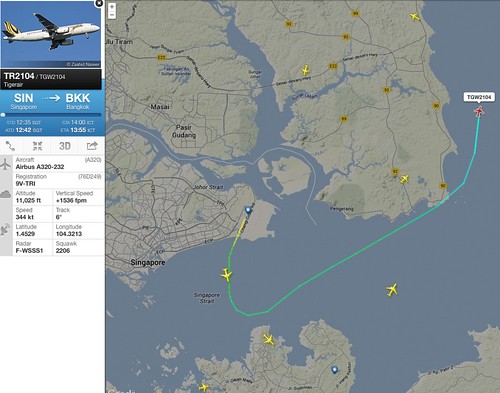 The URL for a flight you might track follow the flight number, e.g. for this flight it is flightradar24.com/TGW2104.

Since we are in a travel hot spot, there is plenty to see when cycling between Punggol – Pasir Ris – Changi – ECP and Marina Bay. Spotting ships and planes with Ship Finder and FlightRadar24 is fun and informative. Both are iPhone apps as well and you can point to planes to identify their types with location settings on!

Flight Radar is also a $5 desktop app for Mac OS X with a tweaks such as airline and altitude filters. There is also the less sophisticated $6 BoatWatch app. All helpful in illuminating some details about the intense air and sea traffic around Singapore.

Welcome to Singapore, Sultan of Brunei! Via Flightradar24 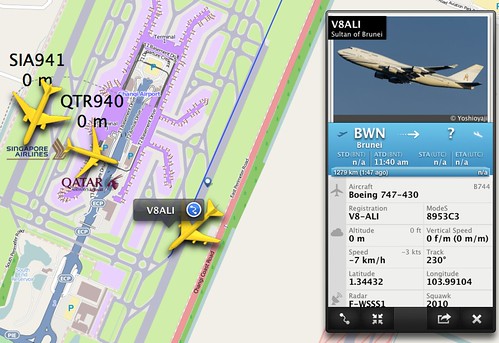 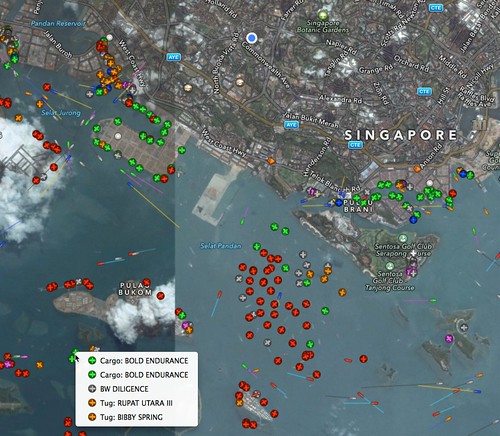 This morning, Debby Ng of the The Hantu Bloggers tweeted from Pualu Hantu with a photo, “This ship seems anchored scarily close to the reefs at Pulau Hantu…” 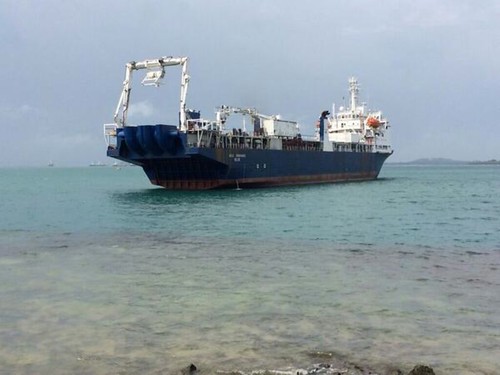 I looked up Ship Finder on my iPhone to identify the ship and learnt it is Bold Endurance, a Barbados-registered cargo ship/cable layer:

You can track its position with this Ship Finder link http://shipfinder.co/ship/314112000. Once you know the ship’s name, you can look up more information via sites like MarineTraffic.

As I “watched” via Ship Finder, Bold Endurance carefully manoeuvered in the deep waters off Pulau Hantu, clear of the reefs, under Debby’s concerned watch, to a position further away. Hearts in mouth while she watched, I am sure.

Map with fringing reef (orange) and patch reef (green) from
the Coral Reefs of Singapore webpage. 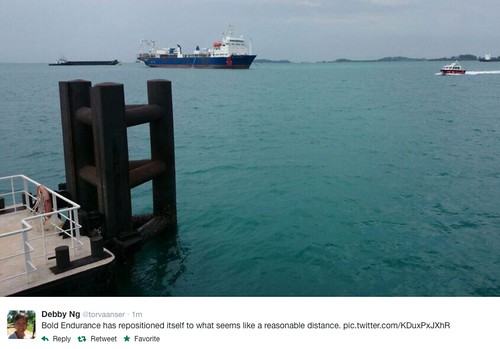 We have a phenomenal amount of ship traffic in Singapore waters. I only realised how much when sailing in from the South China Sea on the Götheborg in 2006. After many nights in the open sea from Hong Kong, the ship officers had furrowed brows as we neared Singapore.

On watch from midnight to dawn, we were spotting ships in every position around us as we approached Singapore! It was certainly impressive. The two Singapore Navy officers on board were glad to lend a hand in familiar territory as we navigated to Marina Bay.

With Ship Finder (also an iPhone app), landlubbers in Singapore can identify and track ships to get a feel of the bustling marine traffic which led to Singapore’s existence. For the environment community, it is a useful tool to understand the activity in our straits, which affect the marine life which has persisted in these waters.

Bold Endurance is an interesting ship Canadian, Filipino, Ukranian and English crew and can stay out at sea for two months. In ?2004, they laid a cable between Manila and Singapore:

“On the job between Manila and Singapore, the crew laid cable out into the South China Sea from Manila to the halfway point. There they marked the location and dropped the cable end to the ocean floor. The ship then went to Singapore and laid cable out from that end. When they arrived back at the halfway point, they recovered the other end of the cable and spliced the two sections together to complete the job.” 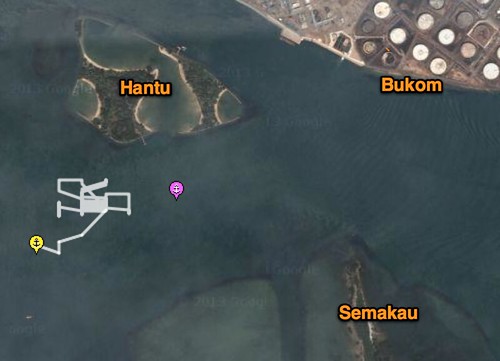