I was glad when SLA-NHB introduced One Historical Map in 2015 which now allows users to compare six street maps between 1966 and 2017. We first had that facility first via iRemember in 2009 but it disappeared, and so I was glad to see it return. And the site is easy to use – after an alumni reunion, we could validate our observation of how crowded the Faulty of Science in NUS had become!

You may view the maps online or stream them on Google Earth or other WMS (web map service) viewer. This is a treasure trove for teaching, research and an exploration of our landscape, and the changes it has experienced over time. A good place to start is your very own neighbourhood! Review the introductory guide by NUS Libraries here.

For example, in the Sungei Mandai Mangrove cleanup project, we will invite the volunteer Site Captains to trace the rivers from the mouth to their origins at the foothills. These topographical maps before the relentless pace of urbanisation in the 1960’s and 1970’s will prove to be an eye opener for us all,. I love how it’s available for close examination on our desktops – it will sure make for some exciting tabletop exploration by the LSM2251 Ecology class! 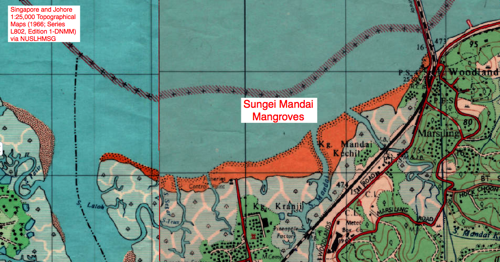