Preparation of the next generation for participation in conservation is enhanced by a programme initiated in 2017 by the Biodiversity Roundtable, and is called the Biodiversity Friends Forum. And this year, we launched the annual Biodiversity Challenge 2021 over three February mornings of Zoom induction workshops.

We did manage a lot in two hours, and ported the wildlife in Singapore game to a jamboard exercise. It’s less interactive but we managed. And we wil catchup on the more intimate 1:7 field trips allowed for in parks in Singapore. Members of the Biodiversity Roundtable have chipped in with many offerings and will get to know these younglings too! 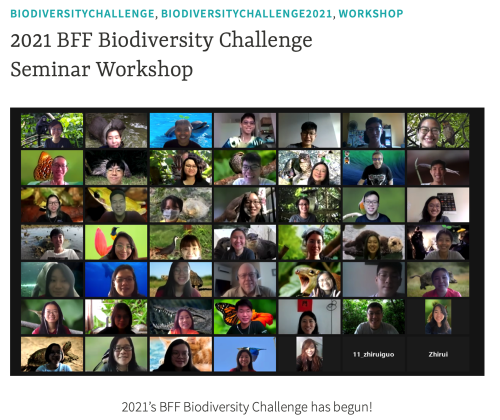 To ensure the ball got rolling quickly, we listed two activities in the first week: a night walk on the Rail Corridor (South) that incudes geography and land use in addition to a glimpse at the night fauna, and Sapling Protection Action at the coastal forst resotoation site at Kranji Coastal Nature Park.

I’m really pleased about the number of BFF Alumni joined the Organising Committee to add valuable help and ideas. Facilitators at the Induction Workshop were mostly all Alumni as well, while Seniors and Mentors of the Biodiversity Roundtable dropped by to say hello to Participant in the Breakout Rooms. I was so glad they were able to do that at the last minute.

Participants can expect to see more of Alumni, Seniors and Mentors at the nature walks, talks and workshops lined up for them in the five months ahead. The BFF series is about building communities as much as awareness and I am looking forward to gettign to know some of them better with time, and learning about their own Acts of Nature!

We will not see big gatherings anytime soon, of course. Already the induction workshop last year was run as parallel sessions in two NUS venues complete with mitigation, due to the threat of COVID-19. Things got much more serious and even the field trips had to be cancelled and negagament driven onine. Our induction workshop is run on Zoom, for all of two hours, but we will complete a second half in March after participants have experienced guided field trips – this is a good thing!

Already know you want to join us/ Sign up for our opening seminar on Sat, 20th Feb 2021: https://tinyurl.com/biodchal21

The BFF Challenge is back! Join our ever-growing community of BFF as you embark on field trips, biodiversity-exploration and online workshops for exposure to Singapore’s wonderful flora and fauna. No experience is required, sign up if you want to learn more about nature.

🤓 want to learn more about the biodiversity scene

🤠 want to do your part in protecting the environment

THIS IS FOR YOU!

To complete the Challenge, you will be involved in the three parts from February to June 2021:

Still unsure? Read more about past year’s BFF Challenges from the participants themselves here: