The tropical swallowtail moth flew in to the corridor outside Starbucks at NUS MD11 last Saturday amidst a meeting about the Evening of Biodiversity.

The next morning I received two other sightings from the south-west, Keppel and Marina, and just now another and another. Looks like its time to post a reminder about submitting sightings though the Habitatnews webpage sidebar (http://tinyurl.com/habitatnews-records) and email me photos at habitatnews@sivasothi.com.

Lyssa zampa appears in urban environments every year and on many months, but in some years it peaks with large occurrences around May – August and the last such peak was observed in 2005.

We are always on the look out for the next big emergence!

20 May 2014 update – thanks for the records everyone! It’s been wonderful receiving sightings from all over Singapore this year especially this humoungous in May; I have been waiting for this large-scale reporting of Lyssa zampa since 2005! While it is numerous in some areas, it is absent elsewhere, so we are lucky to see this moth! Thank you and keep those records coming in! – Sivasothi aka Otterman 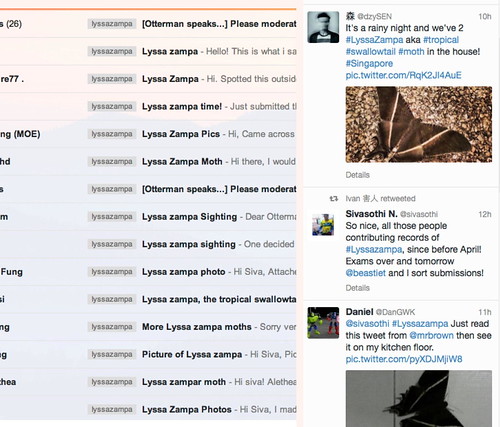 127 thoughts on “Will Lyssa zampa, the tropical swallowtail moth, make a big appearance this year?”